We’re living in some interesting times with ridiculously high food prices and  supply chain disruptions.  Rosie lived through similar times herself. In her day, even with rationing, grocery shelves were empty and many items, such as sugar, were very difficult to come by.  So, if you’re having trouble finding the ingredients for the traditional Thanksgiving dinner, or if you simply want to try something new, here are a few suggestions.

Ham has been a popular Thanksgiving option for as long as I can remember. Some families serve both ham and turkey. I also have friends whose kids who are allergic poultry, so ham is their traditional holiday meal. It goes well with sweet potatoes too, so bring on the candied yams.

For those families who are into hunting, venison, or even elk, could be served at Thanksgiving. In fact, I recall once reading an article about the first Thanksgiving feast, and they didn’t have turkey and stuffing.  Instead they had local cuisine, which included venison. Keep in mind, however, that wild game tends to have a, “gamey,” flavor which many people don’t like, so it might be a good idea to offer ham, or another dish, for those who don’t like venison.

The article I read also said lobster was another served at the first Thanksgiving. Makes sense, as we all know New England is famous for its lobster. You know, I could really, seriously, get into this one. I love lobster, so throw in some red potatoes and corn on the cob, and I’ll be a really happy camper. I may have to serve this myself sometime.

I’ve never been overly fond of turkey. It tends to be too dry for my taste, and it’s simply not that flavorful. So last year I began new Thanksgiving tradition. I roasted a chicken instead of a turkey, and it was so much better. Juicier, more flavorful, and I can serve with with stuffing and mashed potatoes and gravy. There are also fewer leftovers. Roasted chicken works well for small gatherings, and for a bigger gathering you can probably get two chickens in your turkey roaster. Then, the following day, I make white chicken chili with the leftovers.

So, there you have it, and I’m sure you can come up with other favorite dishes yourselves. I know my favorite Thanksgiving memories aren’t about the food itself. They’re about the family, and friends, I shared it with. 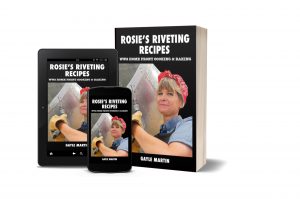 The Rosie’s Riveting Recipes historic cookbook is available on Amazon, Barnes&Noble.com, and other online booksellers.